According to an article in the Pacific Standard, Sacramento’s Quest to End Solitary Confinement for Kids, Sacramento’s detention facility is using new approaches to minimize uses of force and solitary confinement. New developments include staff training, new youth recreational programs, and a multi-sensory de-escalation room (MSDR), dubbed “the Cove” by staff and the youth they serve. The Cove, which opened in November 2016, has been designed as a safe space to take kids in conflict where they can play team-building games to build communications skills or process their feelings by talking with staff. Since opening the Cove, the use of isolation has dropped dramatically. “In October 2010, they spent an average of 28.3 hours of “program restriction” per month, often a euphemism for solitary confinement. By April 2017, the rate of room confinement was just 1.6 hours per month. In February, 2018, the center had an all-time record low for the fewest uses of force, at eight for the month; with use of force measured by any time any staff member needs to apply physical pressure to a kid.” 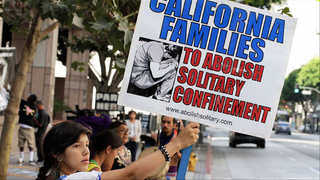 In April 2016, California Senator Mark Leno introduced SB 1143, legislation to ban the use of room confinement for the purposes of punishment, coercion, convenience, or retaliation and to limit its use to situations where  less restrictive options have been tried. In August 2016, the California State Legislature passed SB 1143. Governor Brown signed the bill into law on September 27, 2016.

Co-sponsored by the Chief Probation Officers of California, human rights advocates, experts on youth rehabilitation, and faith leaders, this bill represents a multi-year effort in California. The California Attorney General Kamala Harris supports the bill, stating that isolation for youth “undermines the goal of helping this vulnerable population become healthy and productive members of society.”  Click here to read more from the LA Times Editorial Board.

SB 1143 provides a uniform definition of “room confinement” as the placement of a youth in a sleeping room or cell alone with minimal contact from facility staff. In addition, the bill requires that room confinement is limited to four hours generally, can only be used after all less restrictive options have been exhausted and cannot be used to the extent that it compromises the mental and physical health of the youth.

Before state legislation was passed, Los Angeles County took action. On May 3, 2016, The Los Angeles County Board of Supervisors unanimously passed a motion that bans the use of solitary confinement in all the county’s juvenile detention facilities. The ban would permit solitary only as a temporary response when youth behavior poses a serious risk to themselves and others. Click here to read more in LA Witness or the New York Times. Read about how LA County is now using art to re-purpose the SHU (Special Handling Units) previously used for solitary confinement.