Since the 1990’s, the Office of Juvenile Justice and Delinquency Prevention (OJJDP) has administered two biennial surveys: the Juvenile Residential Facility Census (JRFC) and the Census of Juveniles in Residential Placement (CJRP). For more information on OJJDP Resources and Bulletins, click here. 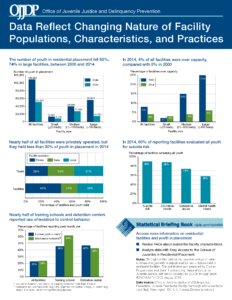 In 2010, OJJDP published results from a new survey called the Survey of Youth in Residential Placement (SYRP). The SYRP was based on data collected in 2003 directly from youth in placement through anonymous interviews. The SYRP found that 35% of youth reported being isolated – locked up alone or confined to their room with no contact with other residents. The vast majority of youth who were isolated (87%) say this was for longer than 2 hours and more than half (55%) say it was for longer than 24 hours. In 2009, an OJJDP study by Lindsay Hayes describes a “strong relationship between juvenile suicide and room confinement,” finding that 50% of the victims were in solitary at the time of their deaths.

Conditions of Confinement: Findings from the Survey of Youth Residential Placement, OJJDP Juvenile Justice Bulletin, May 2010 (2003 national data on isolation based on self-report from youth)

Unfortunately, there is no common source for state or local data on the use of solitary confinement for youth. Some state or local data on solitary can be found in other sources such as litigation documents, media reports, legislative hearing testimony, reports by advocates, DOJ documents, or in some state juvenile justice agency PowerPoints or webinars. Some examples include Wisconsin, Oregon’s Department of Corrections, Syracuse, Florida, and South Carolina.

DATA ON SOLITARY IN ADULT PRISONS AND JAILS

Much of the research on solitary confinement has been on adults. However, general trends in this data may correlate to the use of solitary in facilities that house youth.

Use of Restrictive Housing in U.S. Prisons and Jails, 2011-12, Bureau of Justice Statistics, October 2015

In 2015, the Department of Justice’s Bureau of Justice Statistics released data on the use of segregation and solitary confinement in adult prisons and jails. This report is based on data from the National Inmate Survey conducted during 2011-2012 in 233 state and federal prisons and 357 local jails, with a sample of 91,177 adult inmates nationwide.  Based on the report, on any day in 2011-2012, 4.4% of inmates in state and federal prisons and 2.7% of inmates in jail were held in restricted housing. The BJS report also found that 18.1% of prison inmates reported being in some form of solitary within the last 12 months. Over 50% of these inmates reported being in solitary for more than 30 days. The report also found that younger inmates, inmates without a high school diploma, and lesbian, gay, and bisexual inmates were more likely to have spent time in restrictive housing than older inmates, inmates with a high school diploma or more, and heterosexual inmates. The use of restrictive housing was also linked to inmate mental health problems.

Time-in-Cell: The ASCA-Liman 2014 National Survey of Administrative Segregation in Prison, Yale Law School and the Association of State Correctional Administrators

This report outlines data on both the numbers and the conditions in restricted housing nationwide, excluding juvenile facilities. Based on a survey, 32 states, the District of Columbia, and the Bureau of Prisons, reported a combined 66,522 inmates in restrictive housing, or approximately 6.3% of their combined inmate population. If those numbers were illustrative of the jurisdictions that did not respond, ASCA-Liman estimated the number of inmates in restrictive housing nationwide in 2014 to be approximately 80,000 to 100,000, not counting jails, juvenile facilities, or immigration and military detention.

In November 2016, this new report from Yale Law School and the Association of State Correctional Administrators reveals the most current national data on who and how many adults are in solitary confinement in the United States. This report follows 3 prior reports released by the Liman Program at Yale and the ASCA in 2013 and 2015. Aiming to Reduce-Time In-Cell, highlights a growing interest from states in reducing the use of solitary in adult prisons and jails. An article from the Marshall Project summarizes the report’s key findings. Notably, the authors of the report faced significant limitations caused by the lack of available data.