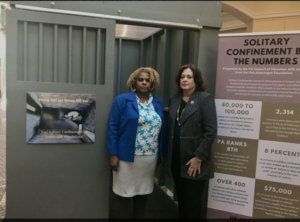 In January 2020, Pennsylvania legislators (Senator Larry Farnese and Representative Tina Davis) introduced bills to significantly limit solitary confinement, including for youth under the age of 21. SB 832 and HB 497 apply to state and county facilities, as well as any facility which confines a juvenile. The bills were introduced the same day that advocates installed a replica solitary confinement cell in the state Capitol Building.

While SB 832 limits solitary for most adults to 15 days, §5103 explicitly bans solitary for anyone under the age of 21. Instead institutions or clinicians must screen youth to determine if they meet the standards for civil commitment and, if so, place them in a specialized unit or the least restrictive short-term care or psychiatric facility. Solitary confinement is defined as “confinement of an inmate in a correctional institution or facility due to disciplinary, administrative, protective, investigative, medical or other classification, in a cell or similarly confined holding or living space, alone or with other inmates for approximately 20 hours or more per day, with severely restricted activity, movement and social interaction.” See more coverage from WENY News and the Philadelphia Tribune.

Philadelphia County regularly puts kids as young as fifteen in solitary confinement inside adult jails. Despite a 2016 pledge from jail administrators to end the practice, the Inquirer and Daily News reported that long-term solitary confinement was imposed on youth in Philadelphia county adult jails 70 times, for an average of 32 days, from January 2017 through March 2018.

In June 2018, the Philadelphia Department of Prisons announced plans to move the boys to a unit at Riverside Correctional Facility, the city jail for women. Advocates report that, “over the last two years, there have been multiple instances of youths attempting or threatening suicide while housed in Philadelphia’s adult jails. These cases show just how profoundly ill-equipped Philadelphia’s adult jails are to house children. When jail staff believe that a youth may be suicidal, that young person is transferred to a psychiatric unit in another jail, where he or she may be kept half-naked and freezing in isolation for days—if not weeks—at a time, as documented by the Inquirer and Daily News in 2017.”

Prison Commissioner Blanche Carney said the prisons have policies in place to reduce punitive segregation for juveniles, but youth and advocates it still happens. According to an article in Philly.com in 2017, dozens of youth are put in solitary confinement for an average of 32 days at a time. In 2017, State Representative Joanna McClinton, a former Philadelphia public defender, announced her intent to introduce legislation that would prevent youth from being housed in adult jails before trial unless charged with homicide.

Kids in solitary in Philly jails: ‘It was the worst time of my life’ (August 2016)