Why We Should Fight to End Solitary Confinement for Kids

There is a growing national consensus that we must eliminate solitary confinement for children, and that we can do it successfully and safely. The story of Kalief Browder, a young man who took his own life after spending 14 months in solitary as a teen, reached millions through a documentary on Spike TV

At the federal level, President Obama and the Department of Justice called for a ban on solitary confinement for young people. The Office of Juvenile Justice and Delinquency Prevention strongly supports efforts to end youth solitary. Many professional organizations including the American Academy of Adolescent and Child Psychiatry, the American Psychological Association, the National Partnership for Juvenile Services, the American Bar Association, and the National Council of Juvenile and Family Court Judges support the end of solitary confinement for youth. A bi-partisan group of Senators introduced federal legislation called the MERCY Act – along with a companion bill in the House – that limits the use of solitary confinement for youth in federal custody. Similar bi-partisan legislation was introduced in 2015. Ohio, Massachusetts, Oregon, and other state agencies have drastically cut solitary confinement by adopting more effective way to hold youth accountable in ways that help teach kids skills to respond differently in the future. Other states like California, Colorado, Nebraska, and the District of Columbia have passed laws to limit solitary. Additional states have legislation pending to do the same including Oregon and Connecticut. State facilities in Wisconsin, New York, New Jersey, Ohio, and Tennessee have been sued for putting kids in solitary confinement. The Department of Justice has weighed in with statements of interest, agreeing that putting kids in solitary is harmful and ineffective.

WHAT IS SOLITARY CONFINEMENT? 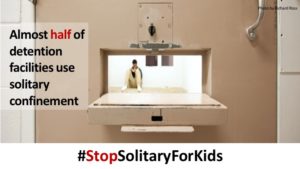 Solitary confinement is the involuntary placement of a youth alone in a cell, room, or other area for any reason other than as a temporary response to behavior that threatens immediate physical harm.  Most youth facilities refer to solitary confinement by different names –  seclusion, isolation, segregation, or room confinement.

We want to stop any practice that meets this definition, regardless of what it is labeled. 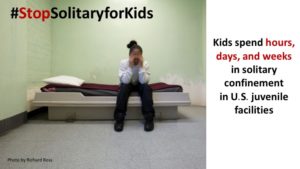 In 2012, the U.S. Attorney General’s Task Force on Children Exposed to Violence called for the end of solitary confinement on youth, stating that “[n]owhere is the damaging impact of incarceration on vulnerable children more obvious than when it involves solitary confinement.”

Youth corrections systems in Ohio, Indiana, Massachusetts, and Oregon have improved the safety of facilities and decreases violence involving youth and staff by reducing the use of solitary 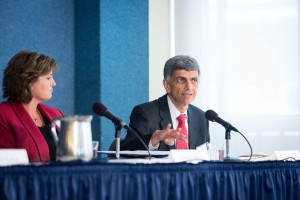 Several state and local jurisdictions have successfully reduced room confinement.  The Colorado Division of Youth Services, for example, decreased isolation by 68% from October 2016 to July 2018. Youth-on-staff assaults are also down 22%.  After routinely using room confinement for over 22 hours per day, the Shelby County (Memphis) Juvenile Detention Facility virtually eliminated the use of room confinement for longer than 59 minutes. Following federal litigation and subsequent reforms, the Ohio Department of Youth Services was able to end the majority of incidents of room confinement within four hours. Between 2014 and 2015, the agency reduced room confinement by 89% and acts of violence by 22%. The Oregon Youth Authority also lowered the number of times isolation was used from 370 instances in July 2016 to 140 instances in December 2018. Other states and local jurisdictions have also taken steps to reform the use of juvenile solitary confinement on youth. Some efforts have taken the form of agency policy change or statewide legislation, others have been in response to litigation and legislation.

The Stop Solitary for Kids mission is to safely end the practice of solitary confinement for youth in juvenile and adult facilities across the country. Stop Solitary for Kids is a national initiative created by four diverse partner organizations with expertise in juvenile justice reform. The partner organizations include advocates, researchers, communications specialists, policy consultants, and facility superintendents and agency administrators of juvenile justice agencies. We focus on developing solutions that can create measurable and lasting change to end solitary. Our work includes public education, research, legislative education, policy reform, improved facility practices, and technical assistance.